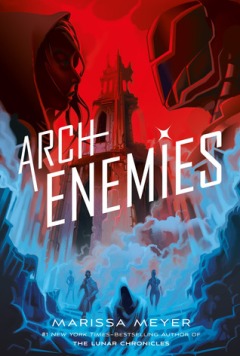 Time is running out.
Together, they can save the world.
But they each other’s worst nightmare.

In Renegades, Nova and Adrian (aka Insomnia and Sketch) fought the battle of their lives against the Anarchist known as the Detonator. It was a short-lived victory.

The Anarchists still have a secret weapon, one that Nova believes will protect her. The Renegades also have a strategy for overpowering the Anarchists, but both Nova and Adrian understand that it could mean the end of Gatlon City – and the world – as they know it.

If you want to read my review for the first book, Renegades, you will find it here.  I won’t spoil this book, but I can’t promise there won’t be spoilers of the first.

The second installment of this trilogy was just as good as the first and maybe even slightly better.  The story is still being told from the dual perspectives of Nova and Adrian, and it is still fascinating to see the world through their two very different sides.

Nova is such a morally interesting character.  She feels such loyalty to her uncle and the Anarchists, but she can still like the Renegades that she has come to know.  She can see that both sides sort of have it wrong, how to run the world, but she thinks that the Anarchists belief that everyone should be free to choose their own life and not be afraid of being a prodigy is still the better choice, although she has doubts at times.  Her relationships with the other Renegades especially with Max and Adrian are not helping her with these issues.  They often confuse and muddy up the waters.  Her life is full of secrets she keeps from those she cares about and it will be interesting to see how this all ends.

Adrian is still a sweetie.  He is also blindly loyal to the Renegades, but he sees their flaws and isn’t afraid to call them out or try to do something about them.  His alter ego the Sentinel is his way of showing the Renegades that there is a different way of doing things, but they don’t see him that way.  His resistance to having a relationship with Nova is also interesting.  You can see how much he cares about her, but he isn’t ready to reveal some of his secrets to her yet.  Some of the things he does for Nova in this book are amazing.  I think his talent is even stronger than he knows and it may prove to be what is needed in the end.

The plot for this one was better paced and the ending was heart breaking and amazing.  There were some quieter sections, where some really sweet scenes between Nova and Adrian and then some of the ones that involved Max were mixed through out the more action sequences.  There was a new villain in the background of the story, Hawthorn, who I would have liked to see more of.  Her ability and origin story would be interesting to know.  I was also glad to see that some of the nastier Renegades got what was coming to them.  Agent N is an interesting concept and really adds to the moral dilemmas of the characters, although both are willing to use it when it matters.

I think this quote sums up my feelings about the book the best:

“It’s not all black and white, good and bad. Peoples actions…their motives…there are” – he circled his hands in the air – “gray areas.”

It is really going to be interesting to see where this story goes from here.  Both Nova and Adrian are close to having all of the their secrets exposed and their lives forever changed.