Magnus Chase and the Gods of Asgard

The Sword of Summer (book 1)

Magnus Chase has seen his share of trouble. Ever since that terrible night two years ago when his mother told 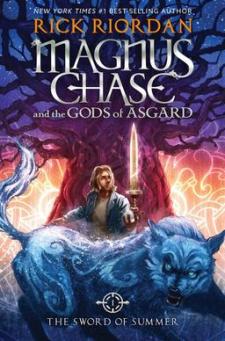 him to run, he has lived alone on the streets of Boston, surviving by his wits, staying one step ahead of the police and truant officers.

One day, Magnus learns that someone else is trying to track him down—his uncle Randolph, a man his mother had always warned him about. When Magnus tries to outmaneuver his uncle, he falls right into his clutches. Randolph starts rambling about Norse history and Magnus’s birthright: a weapon that has been lost for thousands years.

The more Randolph talks, the more puzzle pieces fall into place. Stories about the gods of Asgard, wolves, and Doomsday bubble up from Magnus’s memory. But he doesn’t have time to consider it all before a fire giant attacks the city, forcing him to choose between his own safety and the lives of hundreds of innocents. . .  .

Sometimes, the only way to start a new life is to die.

The Hammer of Thor (book 2)

Thor’s hammer is missing again. The thunder god has a disturbing habit of 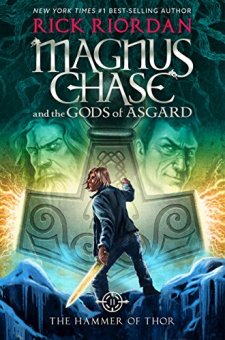 misplacing his weapon – the mightiest force in the Nine Worlds – but this time the hammer isn’t just lost. It has fallen into enemy hands.

If Magnus Chase and his friends can’t retrieve the hammer quickly, the mortal worlds will be defenseless against an onslaught of giants. Ragnarok will begin. The Nine Worlds will burn. Unfortunately, the only person who can broker a deal for the hammer’s return is the gods’ worst enemy, Loki — and the price he wants is very high.

So I’m not sure how to say this, I really didn’t like the first book in this series.  I did the audiobook last fall when it came out and when I finished it I just remember thinking, “Uh, is that it?”  Which was a shame, because I have loved everything that Rick Riordan has written (including his adult books), and I so wanted to love this one, but something was missing.  After consulting others who had listened to the audiobook and students who had read the book, I came to the conclusion that it must have been the reader, but I’m not sure why. Christopher Guetig has a good voice, and I don’t remember thinking at the time that it was awful, but I can’t explain it otherwise.  Everyone I ask who read it, loved it. The ones who listened didn’t.  So, apparently I also erased most of the story out of my head, because I can’t really say what it was about.  I remember that I liked the idea of Valhalla being a hotel and I liked Odin, but that is about it.

The second book on the other hand, I really liked.  I still can’t say that I loved it, but I did really like it.  It was funny and smart and had a great story, that I recognized from the Norse myths.  Magnus Chase’s character is growing on me.  He has some issues, but he has lots of strengths to like, such as loyalty and family.  I also like the newest character Alex, who has a very dry sense of humor, which I really appreciate. The book had a good pace and the reader, Kieran Culkin, did a good job.

So I still don’t love this series as much as The Percy Jackson books, but it is growing on me.  I’m really looking forward to the next book though, because it looks like some of the characters from the other series will be making an appearance.

Here is the book trailer for the series.  I love the narrators voice!  Why couldn’t he do the books!

One thought on “Audio Friday”