Maybe a Fox by Kathi Appelt and Alison McGhee 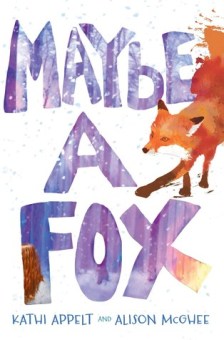 Into thin air, Sylvie goes missing, and as Jules stumbles in grief, a fox cub is born. A shadow fox, spirit and animal in one. From the minute the cub opens her eyes, she senses something very wrong. Someone—Jules.

Who is this Jules? Who is this Sylvie she cries out for? And why does the air still prickle with something unsettled? As that dark unknown grows, the fates of the girl Jules and the fox cub, laced together with wishes and shadowy ties, are about to collide.

My apologies for reviewing so many books about dealing with death.  This appears to be the theme of the year among the middle grade books as well as books being picked by the Mock Newbery websites as possible winners. I enjoy trying to pick the Newbery every year and so try to read as many as I can that others, who are better at picking than me, think might have a chance.  This one I must say has a pretty good chance.  It does deal with death in a very nice, although maybe a bit heavy handed, way. Jules is a great character who feels unbelievably responsible for her sister’s death. Her father is also a strong figure, although not as well drawn as he could have been.  I also liked the fox and her role that she plays in the story.  I could easily see this one winner or at least getting an honor.

The audiobook was well done. Alison McGhee has a great voice, very calm and soothing, which was what this story needed.  Although I did find myself almost nodding off a couple of times because of her quiet and soothing tones.

All in all this is a powerful book about loss and dealing with grief.  It may not be for every tween, but it could help someone cope with their own feelings and emotions about loss.