The Undertow Trilogy by Michael Buckley

Sixteen-year-old Lyric Walker’s life is forever changed when she witnesses the arrival of 30,000 Alpha, a five-nation race of ocean-dwelling warriors, on her beach in Coney Island.

The world’s initial wonder and awe over the Alpha quickly turns ugly and paranoid and violent, and Lyric’s small town transforms into a military zone with humans on one side and Alpha on the other. When Lyric is recruited to help the crown prince, a boy named Fathom, assimilate, she begins to fall for him. But their love is a dangerous one, and there are forces on both sides working to keep them apart. Only, what if the Alpha are not actually the enemy? What if they are in fact humanity’s only hope of survival? Because the real enemy is coming. And it’s more terrifying than anything the world has ever seen.

Lyric Walker was there when the Alpha arrived. Like many, she wondered if they were invaders, never suspecting that they were on the run from a greater terror. When the real threat arrived, it 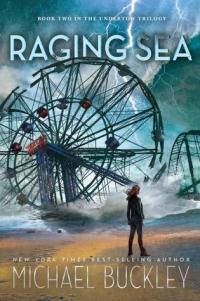 came with a tidal wave that destroyed Coney Island. Everything and everyone Lyric ever cared for, including the Alpha prince Fathom, was either killed or lost forever. It changed the world. Now the military fights a war it cannot win against an enemy that will not die. Walls and roadblocks pit state against state. Refugees are public enemies, and a new nightmare approaches that is even more terrifying and deadly. In the midst of this chaos, Lyric, along with her best friend, Bex, and the prickly Alpha girl Arcade, search for Tempest, a rumored top secret camp where her parents might be imprisoned. But once they find it, she is captured as well, and offered a deadly deal she cannot refuse. The world’s last, best hope is a group of thirty-three children who possess the same powers as she. It falls on her to train them before the second wave of a cataclysmic invasion eliminates mankind for good.

“There’s something out in that water. Be ready to take the people you love and leave when it comes onshore.”

For three months, Lyric Walker has been trapped in the hunting grounds, the Alpha city at the bottom of the ocean. But Lyric Walker, Brooklyn girl, is not going down without a fight. She makes an unlikely alliance with her jailor, a Rusalka named Husk. Husk reveals the truth about what actually resides in the Great Abyss. The Great Abyss is not some Alpha god but belongs to an unknown clan of monsters, ones who think in a hive mentality and believe anyone who cannot hear their voice is broken and must be destroyed. And Lyric has just woken them.
After a death-defying escape, Lyric makes her journey back to the mainland to prepare humanity for another monster invasion. Once reunited with her parents, Bex, and hot-nerd-with-potential Riley, Lyric has to break the terrible truth.
Lyric was just a girl when the Alpha arrived in her hometown. She was a soldier in the second attack that saved her world. What will she have to become now, and who will she have to leave behind?

I already had a healthy fear of the ocean.  I grew up on the east coast and saw Jaws at a young and impressionable age.  I also read it at a young and impressionable age.  Needless to say I don’t swim out far when I am at the beach, nor do I leave the sight of land when we are out on the boat.  That said, after reading this trilogy I am even less likely to go too far on the ocean, because, hey,  we really don’t know what is underneath all of that water.

But I jest (a little), this was a really good series with some fascinating creatures and a great heroine. Lyric was awesome.  She handled everything that befell her with determination to help her family and friends and yes, even humanity. Even when the government was hunting her and the agency Tempest had her in its grip, she never gave up.  She did have her low moments, don’t we all, but she still somehow managed to go on and to survive.

The first book was not quite as dark as the other two, especially at the beginning.  The romance that started between Lyric and Fathom, was sweet.  It was also interesting learning about all of the different mercreatures,  some were quite creepy and scary sounding.  But as the government gets more and more paranoid and people get scared of the new comers, things start to fall apart.  I loved the relationship between Lyric and her parents as well as her best friend Bex.  They were all always there for each other and never gave up on each other either.

Book two reads a little more like a road trip/Thelma and Louise type story, with Lyric, Bex and Arcade out on the road trying to find the secret Tempest compound where her parents and Fathom are being held.  Tempest is a really horrible place, run by horrible people.  Some of the things they do to Lyric and the others like her are horrendous, not to mention what they do they do to the alphas.  Also, it wasn’t too surprising that the states would fall apart during this crises, with states that are landlocked refusing to help the coastal states, or the refugees from those areas.  I’m afraid that Buckley’s view of how humanity would react in this type of crises is not a pretty one, but probably accurate.

Book three was as different from the first two as they were from each other.  The narrative constantly moves back and forth from the present to flashbacks of what happened while she was held captive by the Rusalka and Minerva their leader.  This sometimes interfered with the flow of the present day narrative, but I think a linear narrative would have been more confusing.  My main issue with this book was the fact that Fathom doesn’t show up until nearly the end, I also had a little trouble with the ending, it just seemed to be too abrupt and somewhat predictable.

The trilogy on the whole is sound, and a really good read. Mr. Buckley has a nice sense of timing, plot and characters that you get attached to and want to root for.  There is a good tumblr for the series, although it doesn’t look like it has been updated since the second books release.  It has some cool videos though such as this one: