I picked up a copy of How to Hang a Witch last year through the SYNC free audiobook program, but I didn’t get around to listening to it until this past summer. The author actually narrates the first book, which is always fun. The second book, Haunting the Deep, I also listened too, although we have a different reader, Tara Sands, who does an excellent job. Both of these books are set in modern day Salem, but deal with two important historical events, the Salem witch trials and the sinking of the Titanic. They were both incredibly good reads that were very hard to put down. I am definitely picking up her next series as soon as I can. The author notes at the end of the books are not to be missed as they explain the author’s connection to both historical tragedies.

“You see, ‘witch’ is merely a title. It is not the title that is inherently bad but the people who decide what that title means.”

I really liked this book. I really liked how the author intertwined the factual parts of the witch trials to what was happening in the story. Because when you really get down to it the whole witch trials were all about bullying. This is all about how history repeats itself if we never take the time to really understand it.

Sam was not an easy character to like, but she is likable. She can be thorny and a little too acerbic in her interactions with others. But given her history and current circumstances it was certainly understandable. But she gets double points for being brave and putting other people’s lives and safety above her own when it was needed. From the few flash backs we get of her and her dad, you can tell that they had a great relationship. She had one with her stepmom too, but that seemed to change with the move. I never really liked Vivian as we see her in the present part of the book.

There were lots of other great characters throughout the book. I loved Jaxon and his mom. I would kill to have his mom bake for me. I really liked how Jaxon kept wanting to give Sam a chance to be friends even when she kept warning him off because of the curse. The Descendants were all awesome as well as thoroughly modern witches. I loved Alice’s acerbic wit and Susannah’s kindness.

Finally I have to mention Elijah as he is a big part of the story. He is a ghost that only Sam can see, and he was around during the trials. He is initially angry and unhelpful, but eventually they start to become romantically involved. I don’t really have a hard time with that to a point, but at some point you have to see there isn’t any future in it. And I would take Jaxon over Elijah any day. But the heart wants what it wants.

I absolutely loved the plot. It was so riveting and so hard to put this down and the pacing was perfect. It is hard to believe that this was her debut book. I can’t say a whole lot without spoiling the story, but I will say that there really is a curse and the person who cast it will surprise you. The ending was amazing and at times I was really worried that anyone would survive. As I said before the intertwining of the past and present was really well done.

“We always think that history is fact and literature is fiction. But the truth is, they are all stories.”

I think I liked this one better than the first! Again the mixture of past and present was just brilliant and very well done. Like most people I have a fascination with the Titanic, and the horribly senseless tragedy. This book does a nice job of bringing in the social injustice of the tragedy as well.

Almost all of the same characters are back for this story, so I won’t spend a lot of time talking about them. But much to my delight we see a lot more of Alice and Susannah. They actually all start to be a bit more friendly to Sam and she with them. I think Sam realizes finally that she can’t escape who she is and that things are going to happen around her that can’t be explained away. She needs the Descendants as much as they need her.

The plot was better in this one than the first. I loved the dream sequences when Sam was on the Titanic. Now the premise of why she was there and what was really going on, was a bit weak and didn’t entirely make sense? Sorry, but I can’t say more without spoiling, but just be prepared for some weird nonsense at the end. But, still a very interesting and riveting read that I really enjoyed.

These two books will make excellent spooky reads for October, which is why I chose to hold off on the reviews till now. If you are still working on your Spooky TBR list for October, be certain to add these two. You won’t be disappointed. 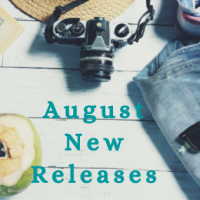