My apologies for not posting for awhile.  I had a really bad head cold, and just couldn’t think let alone write a review.  I was even struggling to get anything read. 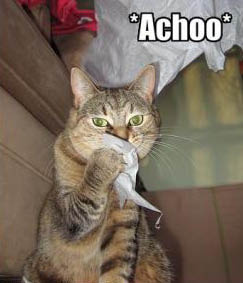 Then I went on vacation, and even though I had some reviews half done that I was going to schedule to post while I was gone, I just couldn’t get them finished with the cold. Then I got back and had to deal with going back to work, and life just continued to get in the way. Oh well, I’m back and eager to start posting again.

My husband and I went to Texas for the first time. Why Texas? Well we had never been and had heard lots of good things about it from a friend, and we felt like going someplace new.

Even though I was still sick for the first few days, we had a very good time.  Texas was hot and dry, unlike home.  We did an incredible amount of driving, over 2,000 miles in 6 days. We went from Austin to Marfa, then to Big Bend National Park and back to Austin. We saw many things along the way, but the one thing that stuck out, at least to me, was that no matter how small the town we went through, there always seemed to be a library.  Many of these libraries were small, but when I looked them up online, I was impressed that they all seemed to belong to the Texas Library System, which allows them to offer more to their patrons.  Most are supported by their communities, and some were even staffed solely by volunteers.

There wasn’t much to do in Marfa while we were there, apparently the art galleries and museums they are famous for are only open on the weekends. But they had a wonderful little library!  And I really enjoyed the message they had painted on the side of the building, what a wonderful way to thank the community! 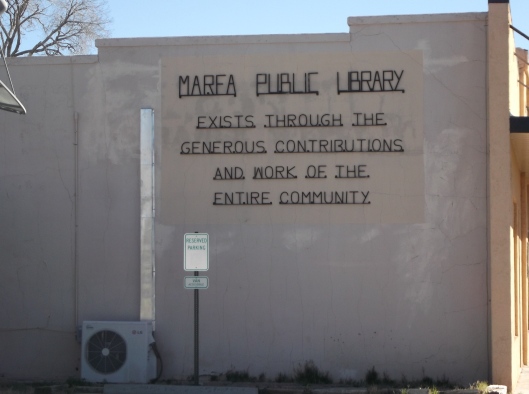 Here is the front view of the library. They had recently expanded and remodeled inside and it was quite nice.

Another Library that I thought was cool was in Harper, Tx near Fredericksburg.

Sorry the picture isn’t great.  This was one that was totally run by volunteers and most of their budget is from their resale shop.

Frederickburg’s library was probably the most impressive and the largest I saw, but as they are the county seat, it made sense. 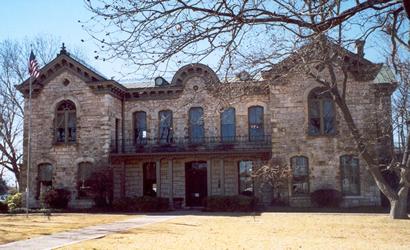 Although the inside was as impressive as the outside, I was a little disappointed with their kids and teen section.  Not as big as some of the other libraries of comparable size.

Last thoughts, even though I saw a lot of libraries, I didn’t see any book stores, which was kind of sad.  Hopefully they get their book buying kicks somehow, as I didn’t see a lot of UPS trucks driving around either.

I did manage to get some reading done while I was away and will be posting reviews again this week.