This Savage Song by Victoria Schwab

There’s no such thing as safe in a city at war, a city overrun with monsters. In this 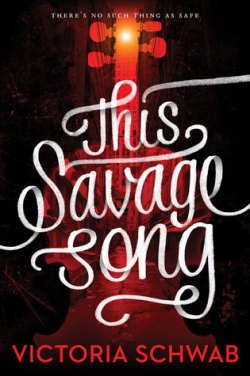 dark urban fantasy from author Victoria Schwab, a young woman and a young man must choose whether to become heroes or villains—and friends or enemies—with the future of their home at stake. The first of two books.

Kate Harker and August Flynn are the heirs to a divided city—a city where the violence has begun to breed actual monsters. All Kate wants is to be as ruthless as her father, who lets the monsters roam free and makes the humans pay for his protection. All August wants is to be human, as good-hearted as his own father, to play a bigger role in protecting the innocent—but he’s one of the monsters. One who can steal a soul with a simple strain of music. When the chance arises to keep an eye on Kate, who’s just been kicked out of her sixth boarding school and returned home, August jumps at it. But Kate discovers August’s secret, and after a failed assassination attempt the pair must flee for their lives.

Ok, I get it now, why everyone says that Victoria Schwab is such a good writer.  This book was amazing!  I often have doubts when I see a lot of people swooning over a book or an author, but I totally think all of the accolades are deserving in this case.

I was enthralled with this book almost from the beginning.  I was a bit confused by August at first, because I didn’t get what made him a monster, but eventually the confusion lifted and I was able to immerse myself in the story.  And what a story, so many twists and turns and interesting concepts of human and monster. Also I was fascinated by how the monsters came into being.  I must say that this is one book I hope doesn’t ever come true, it would be terrifying to live in such a world.

The characters were amazing as well.  I think I like August a little bit more than Kate, although she did grow on me by the end of the book.  I really had a hard time seeing August as a monster, most of the time.  There were others in the story, both human and monster, that were far more monstrous and evil than he was.  Kate could be a nasty piece of work when she wanted to be, but I don’t think she was evil at her core, unlike her father.  I think she came to understand August, and what it meant to be human by the end of this book.

Therese Plummer does a very nice job as the reader.  I was at first thrown by the use of only one person, because the story is told from both Kate’s and August’s point of view. Also at the beginning of the book, each chapter is told from one perspective so I was expecting two voices.  But she still does a great job of sounding like two different people, even without changing her voice.  Still I think I would have preferred two.  Even though I enjoyed the audio, I think I will pick up a print version of the next book and read it instead of listening.  There is so much to this story that I feel I want to spend the time reading it rather than listening to it. It makes it easier to savor the good parts.

Epic Reads did another one of their videos explaining the story.  I just love these!