So, I had planned on doing a review today, but I have been sick and some family stuff has been keeping me busy.  All of my posts from the last two weeks were ones I had written in advance before all of this crap happened.  My brain is on melt down and I can’t focus long enough to get a review done, so I decided to do something easy, hence the WWW Wednesday.  This is a meme hosted by Taking on a World of Words.  Check out their blog and the posts for todays WWW Wednesday.

This meme is pretty easy just answer the three questions:

What are you currently reading?

It’s been a year since the shocking death of August Moriarty, and Jamie and Charlotte haven’t spoken.

Jamie is going through the motions at Sherringford, trying to finish his senior year without incident, with a nice girlfriend he can’t seem to fall for.

Charlotte is on the run, from Lucien Moriarty and from her own mistakes. No one has seen her since that fateful night on the lawn in Sussex—and Charlotte wants it that way. She knows she isn’t safe to be around. She knows her Watson can’t forgive her.

Holmes and Watson may not be looking to reconcile, but when strange things start happening, it’s clear that someone wants the team back together. Someone who has been quietly observing them both. Making plans. Biding their time.

Someone who wants to see one of them suffer and the other one dead.

I started this a couple of days ago, and so far I have mixed feeling about it.  It is really slow and I’m not particularly liking the dual narration or what either of the two characters are doing with their lives.  I saw a review on Thrice Read today that says it gets better.  I hope so.

And because I always have at least three books going, I am also currently reading an ARC, From the Earth to the Shadows by Amanda Hocking and I’m listening to Trouble Makes a Comeback by Stephanie Tromly.

What did you recently finish?

Kady, Ezra, Hanna, and Nik narrowly escaped with their lives from the attacks on Heimdall station and now find themselves crammed with 2,000 refugees on the container ship, Mao. With the jump station destroyed and their resources scarce, the only option is to return to Kerenza—but who knows what they’ll find seven months after the invasion?

Meanwhile, Kady’s cousin, Asha, survived the initial BeiTech assault and has joined Kerenza’s ragtag underground resistance. When Rhys—an old flame from Asha’s past—reappears on Kerenza, the two find themselves on opposite sides of the conflict.

With time running out, a final battle will be waged on land and in space, heroes will fall, and hearts will be broken.

WOW!  I reread the first two books in the series before this one, and I highly recommend doing that.  I think it helped with the impact of the story development.  I also picked up on a few things I missed the first time around.  Hopefully I will get to a full review soon.

What do you think you will read next?

Hmm this is a bit of a tough one for me. My next ARC will definitely be Sky in the Deep by Adrienne Young.  My audio book choices have really been dependent on my mood lately, so I really don’t know what it might be.  I’m thinking it might be Dark Places by Gillian Flynn though.  I have been listening to light and funny lately and I think I might be in the mood for the opposite soon.  When I’m done with Jamie and Charlotte I think I am going to read The Price Guide to the Occult by Leslye Walton. It has been getting mixed reviews on Goodreads, but it’s short and it looks interesting. 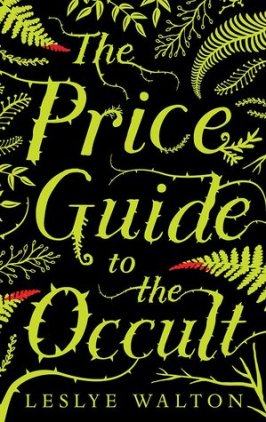 So, that is my WWW Wednesday.  Hopefully things will get back to normal soon and I can’t get some reviews posted.