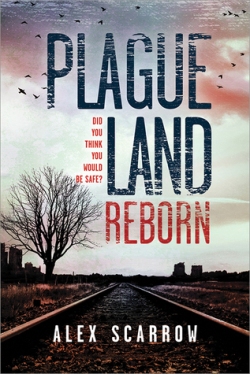 Two years ago, a virus hit London, killing thousands of people and driving the rest into hiding. But Leon has somehow survived, making it through two harsh winters. Now he’s living on the fragile hope that the freezing snow and ice of the English climate wiped out the virus for good. Word even reaches Leon of a rescue boat on its way.

But all is not as safe as it seems. The virus has been busy…

This is the second book in the awesome series and it will also be a hard one to review, simply because it will be hard to talk about without giving major spoilers.  I reviewed the first book here.  There maybe some minor spoilers of the first book here, although I will try really hard not to do anything major.

This one picks up about a year after the first book ended.  Leon and Freya have been on their own surviving through a very harsh winter.  Leon has managed to pick up the pieces after what happened to his sister and has gotten stronger because of it.  Both Freya and Leon have trouble trusting people, with good reason.  Both of these characters are well developed and continue to grow through out this book as well as the face the harsh realities of surviving.

In the first book, we only really learn about what is happening where Leon is, because of course there is no longer any communication systems set up.  In this book we find out what has been happening through out the world through Leon’s dad.  It was good to learn that there were other survivors out there and what else was going on with the virus in other parts of the world.  We do continue to get chapters told through the ‘voice’ of the virus which continues to give me chills.

The plot of this book was just as good as the first.  Lots of twist and turns and some horrific scenes having to do with the virus, but also some horrible things that humans do as well.   It is so hard to talk about without giving stuff away.  But it will keep you wanting more.  The ending was not exactly a cliff hanger, but definitely will keep you wondering what will happen next and will the humans continue to survive.

Even if you are not into apocalypse/dystopian books right now, you should think about reading this one.  I have never read anything quite like it.  It will get you thinking about things and how even the smallest thing can take over the world if given the chance.  I am really eager for the next book to see if humanity survives, I’m not sure we will.