Today is the official half way mark for the year. Hard to believe that the year is half over. It has been an interesting one, but I am hopeful that the next half can only get better. My reading so far this year has been pretty good. Lots of good books and only a few not so great ones. Let’s have a look shall we.

How Much have I read this year so far?

I do participate in the GoodReads challenge every year by setting a goal, but then I pretty much ignore it after that. This is the first time I’ve looked at in months. Any way, it is not an accurate count because it doesn’t included many of my rereads. But it is close enough for now.

So many to choose from, but this was the one that first popped into my head when I read the prompt. Burn was so good, that I am still thinking about it.

Another tough one, but again this was the first one I thought of. I just loved all of the action and so many interesting plot lines. Aurora Burning also has probably the best cliff hanger ending of the year.

New Release I haven’t read yet

So many to choose from, but I’m hoping to read these soon. Just waiting patiently for my library to reopen and start handing out holds.

Most anticipated release for the second half of the year

I decided to limit myself to six books here, it could have easily been 20. Reign, Queen of Volts, A Sky Beyond the Storm and The Nemesis are all the last books in series I’ve been reading. A couple I have been waiting a long time for. Of course you know I am not so patiently waiting for the next adventure of my favorite high warlock in The Lost Book of the White. Black sun is a new book that I am looking forward to reading.

This was an easy one. Both of these were such disappointing reads, I can’t even think about it with out cringing.

I had a hard time deciding if this was a suppose to mean a good or bad surprise, so I chose a book that was both. I think I’m in the minority in that I really did enjoy this book. But I was also surprised by how slow it was and it just didn’t seem to be up to what I have come to expect from this author.

Favorite new author (debut or new to you)

According to Goodreads, these two books are the least popular of the ones I have read this year. It might be because they are not well known outside of Australia. I really enjoyed them though and if you can find them you must read them.

Books that made you happy

These three books just had me in stitches the entire time I was listening to them. If you are looking for a really excellent audiobook to listen to you really should give them a try.

Goals for the rest of the year.

I only have a few goals for the rest of the year:

I hope you enjoyed Mid-Year Freak Out. What is your favorite book so far this year? 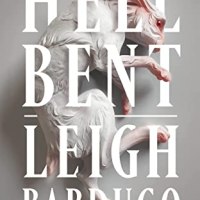