The Empty Grave by Jonathon Stroud 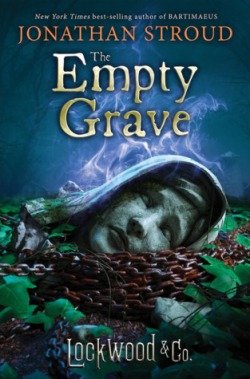 Five months after the events in THE CREEPING SHADOW, we join Lockwood, Lucy, George, Holly, and their associate Quill Kipps on a perilous night mission: they have broken into the booby-trapped Fittes Mausoleum, where the body of the legendary psychic heroine Marissa Fittes lies. Or does it? This is just one of the many questions to be answered in Book 5 of the Lockwood & Co. series. Will Lockwood ever reveal more about his family’s past to Lucy? Will their trip to the Other Side leave Lucy and Lockwood forever changed? Will Penelope Fittes succeed in shutting down their agency forever? The young agents must survive attacks from foes both spectral and human before they can take on their greatest enemy in a climactic and chaotic battle. And to prevail they will have to rely on help from some surprising–and shadowy–allies. Jonathan Stroud once again delivers a rousing adventure full of danger, laughs, twists, and frights. The revelations will send readers back to Book 1 to start the series all over again.

The trouble with really good audio books is that your ears start to hurt after awhile.  I can only listen for so long before my ears start to protest.  But with this book I found that I had to ignore the pain, because I could not stop listening.  I have loved this entire series and have listened to many of the books.  Emily Bevin does an amazing job and she is a delight to listen to. This is a solid middle grade series that has a lot going for it.

First off the whole premise of children and teens hunting and ‘killing’ ghosts is brilliant.  The alternate world that Jonathan Stroud has created is fascinating and full of interesting and creepy ghosts, and even a few creepy adults.  All of the characters, both alive and dead are so different from each other, and well drawn that you feel that you are spending time with them as friends.

I love the whole Lockwood & Co crew.  George, who is such a nerd, but a lovable one.  Holly, who is the organized one and often the voice of reason.  Quill Kipps is a fun one, with his dry sense of humor and complaints about everything.  Lucy is the one that I relate to the most.  Not only because she is the narrator throughout the series and so we know her best.  But because she really wants to do what is right all of the time.  She has a very strong moral sense, and at times has compassion for the ghosts that are often times wanting to kill her.  She has guts and is strongly independent and fiercely loyal.   Lockwood is adorable and I just love him.  He is the glue that keeps the rest of them together.  I was worried that the worst was going to happen to him in this book, but that gang stayed intact even through the powerful and explosive ending.

All of the books in this series have been fast paced and at times scary.  The ghosts are very original and some of them might give more sensitive readers nightmares.  I love the skull in the jar that is a part of the Lockwood crew.  His sense of humor is  just priceless and I love the way that he taunts Lucy.  I really liked the relationship that they develop and the fact that Lucy even sort of likes him and thinks of him as a friend is just adorable in the end.

A great series that I am sorry to see end.  I’ve seen rumors that it is being turned into a TV show which would be awesome.  Except that I am afraid that they will age up the kids, which would be a shame as that is sort of the point of the stories.  Well if it does come to be I will at least give it a chance.