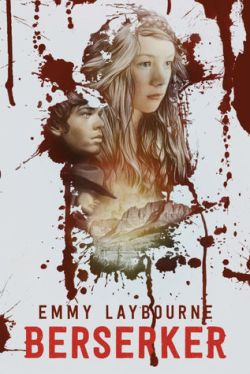 Are Hanne’s powers a gift from the old Norse gods, or a curse?

Her brother Stieg swears their powers are a gift from the old gods, but Hanne Hemstad knows she is truly cursed. It’s not Stieg’s fault that their father is dead, their mother has left, and their brother Knut has been accused of a crime he didn’t commit.

No, the fault lies with Hanne and her inability to control her murderous “gift”–she is a Berserker. When someone she loves is threatened, she flies into a killing state. The siblings must leave Norway for the American frontier or risk being brought to justice.

Aided by a young cowboy who agrees to be their guide, Hanne and her siblings use their powers to survive the perilous trail, where blizzards, wild animals, and vicious bounty hunters await.

Will they be able to reach their uncle, the one man Hanne believes may be able to teach her how to control her drive to kill? With Berserker, Emmy Laybourne, the author of Monument 14, presents her vision of an American west studded with Viking glory.

As I have said many time before, historical fiction isn’t really my thing, except when there is some other element going on like fantasy or a mystery being thrown into the story.  I was a little bit dubious of a fantasy set in the Wild West featuring Norse mythology, but I really liked the Monument 14 series so I was willing to give this one a shot.  I am glad to report that I ended up really liking and enjoying the book.  So much so, that I requested the sequel from NetGalley!  My review for Ransacker will be up tomorrow.

The author has admitted to making up her own mythology based on the Norse stories of Berserkers.  I found the new ideas exciting and totally fitting.  And it totally makes the kids in this family a type of superhero.

The Hemstad family is very close, not just because they have to keep their abilities secret, but because they have had a difficult up bringing and came to rely on each other.  I came to like all of them and was rooting for them through out the book.

Hanne is one of the narrators and she is the berserker of the title.  Her berserker abilities are not pretty when they manifest, some of the killings are quite gruesome.  But her love of her family is what endears you to her.  She has her doubts and worries about the family’s fate.  She is a little harsh with her younger sister Sissel, but truly cares for her.  Her relationship with her brothers Stieg and Knut is also warm and loving.

Owen is the another narrator and the cowboy with a heart of gold.  He doesn’t quite know what to make of the Hemstad family when he meets them, but can’t help offering to guide them through the wilderness.   The romance that grows between him and Hanne is quite lovely, and very appropriate to the time period.

There is also some parts of the story told by Rolf.  He works for a Barron in Norway who is very interested in the Nytte and especially in Hanne’s family.  He offers some background into the mythology and the gifts and how they work.  He follows the Hamstads across the west accompanied by another Nytte.  Things get very interesting when they finally catch up to each other.

The setting and world building felt very authentic.  Many people from Norway settled in the western parts of the country.  The scenery was well described and I almost felt like I was back in Montana.  The Nytte gifts and heritage were well explained and I never felt like I was missing something.  The parts with Owen on a cattle drive also felt real.

This is a stunning novel that is not getting the attention it deserves.  It is full of heart and family values.  The setting and the mythology are well done and the pacing is perfect.  Give it a try, you might be glad you did.