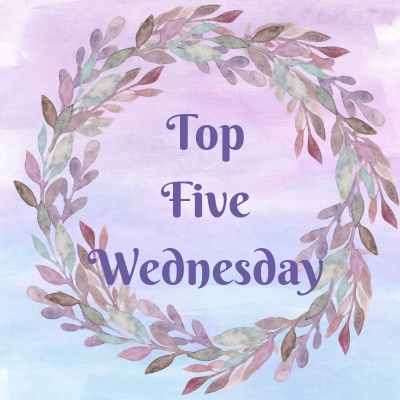 Top 5 Wednesday is a weekly meme hosted by Lainey at GingerReads and Samantha at Thoughts on Tomes.  You can find the group on Goodreads.

February 13: Independent Ladies
–Favorite leading ladies who aren’t distracted from getting shit done by their love interest (they can still have a romance subplot – this is going to be subjective based on what you think would be ~too much~).

I was very excited about this prompt.  It gave me a chance to hype some books I like were there wasn’t a whole lot of romance, or at least the romance wasn’t what drove these independent women.

Give the Dark My Love by Beth Revis

Nedra was totally focused on her training and figuring out how to stop the plague that is killing everyone.  Unfortunately her focus leads her down that dark path that most alchemists seem to go.  I really liked the love interest in this book, he was interested but certainly never pushed her,  He just wanted to understand her and help in his own way.  Can’t wait for the finally in September.  The magical system in this world was a nice mix of alchemical science and magic.

Fighting zombie like creatures, would make any romance less likely to happen, but I really admired both Deuce and Fade and how they handled their relationship.  They loved each other, but surviving and saving mankind always came first.  No stolen kisses on the battlefield for this couple.

Trail of Lightning by Rebecca Roanhorse

Maggie is so independent, she shuns almost all human contact, she just wants to go out and hunt monsters.  But Kai does manage to get under her skin a little.  He is more of a sidekick than a love interest, but I have hopes for them both.

Delilah is also fiercely independent and pretty much does what she wants.  I love her relationship with Kell though.  They are very supportive of each other even when they annoy the hell out of each other.  They have that certain spark though, but are able to keep it in check when they need too.

Arc of the Scythe series by Neil Schusterman

Citra and Rowan have a very complex and weird romance going on.  I get it though. But Citra doesn’t in any way let her feelings for Rowan get in the way of her job.  I have no idea how their story is going to play out, but I am sure that it will be an amazing ride.

That’s it for this week’s top five Wednesday.  I hope you enjoyed my picks.  Please stop by the GoodRead’s group to see what other people have chosen for their favorite independent women.  It should make for an interesting list.  Until next time.