I have been re-reading the DiscWorld books as part of the DiscWorld Readathon sponsored by Pages Below the Vaulted Sky. Please check out her website and join in the fun of reading this fantastic series. 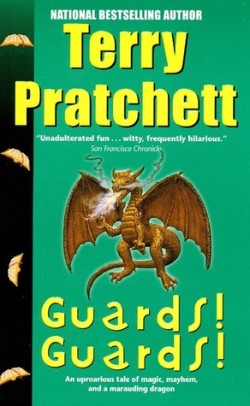 Here there be dragons . . . and the denizens of Ankh-Morpork wish one huge firebreather would return from whence it came. Long believed extinct, a superb specimen of draco nobilis (“noble dragon” for those who don’t understand italics) has appeared in Discworld’s greatest city. Not only does this unwelcome visitor have a nasty habit of charbroiling everything in its path, in rather short order it is crowned King (it is a noble dragon, after all . . .).

Meanwhile, back at Unseen University, an ancient and long-forgotten volume–The Summoning of Dragons–is missing from the Library’s shelves. To the rescue come Captain Vimes, Constable Carrot, and the rest of the Night Watch who, along with other brave citizens, risk everything, including a good roasting, to dethrone the flying monarch and restore order to Ankh-Morpork (before it’s burned to a crisp). A rare tale, well done as only Terry Pratchett can.

This is definitely one of my favorites!  It has many of the characters that I have come to know and love in this world, plus dragons!  What could be better.

This is the first book about the City Watch, and such a bumbling group of heroes they are.  They all have a special role.  First there is Carrot Ironfunderson, an adoptive Dwarf of very large proportions.  He only wants to do what is right and enforce the law, but is met with resistance to this.  Nobby Nobbs, no one knows exactly what Nobby is, but he is such fun.  Then there is Fred Colon, who tries his hardest to be left alive at the end of every night, but he is more or less the leader.

And finally there is Captain Vines.  He is portrayed as a beaten down detective, the sort that you would find in any 50’s detective story or film Noir.  He is awesome.  I love his out look on life:

“If there was anything that depressed him more than his own cynicism, it was that quite often it still wasn’t as cynical as real life.”

He was often the voice of reason as well.  His descriptions of the dragon were spot on, especially about how they couldn’t possibly fly given their size.  He stumbles through the story, but he is endearing.

There are lots of other characters in this story.  We learn more about Lord Vetinari, who rules Ankh-Morpork. He is such an interesting ruler, I find him quite amusing in his ruthlessness and sensibility in running a city.  Death of course makes a few appearances.  But the real star of the secondary characters is the Librarian and the library.

“Knowledge equals power…
The string was important. After a while the Librarian stopped. He concentrated all his powers of librarianship.
Power equals energy…
People were stupid, sometimes. They thought the Library was a dangerous place because of all the magical books, which was true enough, but what made it really one of the most dangerous places there could ever be was the simple fact that it was a library.
Energy equals matter…
He swung into an avenue of shelving that was apparently a few feet long and walked along it briskly for half an hour.
Matter equals mass.
And mass distorts space. It distorts it into polyfractal L-space.
So, while the Dewey system has its fine points, when you’re setting out to look something up in the multidimensional folds of L-space what you really need is a ball of string.”

Finally there is some foreshadowing about some of the coming stories, especially the ones with deal with the gods of Discworld.

“It is said that the gods play games with the lives of men. But what games, and why, and the identities of the actual pawns, and what the game is, and what the rules are—who knows? Best not to speculate. Thunder rolled… It rolled a six.”

Well I could go on about this one, but it is best experienced with little fore knowledge.  Pick it up and give it a try, you will be glad you did!