The Dragon with a Chocolate Heart by Stephanie Burgis

A chocolate-filled, girl-powered fantasy with a heroine who learns what it means to be a strong, fearsome human (and dragon).

Aventurine is a brave young dragon ready to explore the world outside of her family’s mountain cave . . . if only they’d let her leave it. Her family thinks she’s too young to fly on her own, but she’s determined to prove them wrong by capturing the most dangerous prey of all: a human.

But when that human tricks her into drinking enchanted hot chocolate, she’s transformed into a puny human without any sharp teeth, fire breath, or claws. Still, she’s the fiercest creature in these mountains–and now she’s found her true passion: chocolate. All she has to do is get to the human city to find herself an apprenticeship (whatever that is) in a chocolate house (which sounds delicious), and she’ll be conquering new territory in no time . . . won’t she?

This was a sweet read!  I just loved Aventurine and the whole cast of characters in this lovely and delicious book for middle grade readers. I think tweens will be gobbling up this story and want more.

Aventurine was a great heroine, both in her dragon and her human form.  She is no one’s fool, even when she gets herself into situations that she has no idea how to get out of.  I loved her free spirited and adventurous attitude towards life.  I also admired that when she found chocolate, she decided that it was her calling and that she would do anything to get more of it, but also learn all about it and how to make it herself.

I loved the concept of a food mage, someone who works their magic through their cooking and food.  I think that most really good chefs and bakers are a type of food mage.  Although what this food does to Aventurine was not very nice, the interactions between them and her instant attraction to chocolate was priceless.

Silke, a girl who befriends Aventurine, was also a really fun character.  She has a lot of street smarts, but is also savvy and knows how to work a situation.  Marina, the chocolatier who takes on Aventurine as an apprentice, was also a wonderful character.  She was all business in the kitchen and could be quite prickly, but she was never mean or abusive to anyone.  Hurst, Marina’s partner, was also a good solid character.  There are also not so likable characters in the story, which you need of course.

We don’t see much of Aventurine’s family through most of the book, but when they show up near the end you could see the love and hope that they have for Aventurine.  They want her to succeed, no matter if she does it as a human or a dragon.

A marvelous and delicious read, I highly recommend it for any one who likes dragons or chocolate, but especially both. 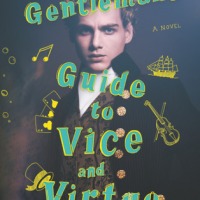