“It was the living who ignored the strange and wonderful, because life was too full of the boring and mundane.”

They say there are only two things you can count on …

But that was before DEATH started pondering the existential. Of course, the last thing anyone needs is a squeamish Grim Reaper and soon his Discworld bosses have sent him off with best wishes and a well-earned gold watch. Now DEATH is having the time of his life, finding greener pastures where he can put his scythe to a whole new use.

But like every cutback in an important public service, DEATH’s demise soon leads to chaos and unrest — literally, for those whose time was supposed to be up, like Windle Poons. The oldest geezer in the entire faculty of Unseen University — home of magic, wizardry, and big dinners — Windle was looking forward to a wonderful afterlife, not this boring been-there-done-that routine. To get the fresh start he deserves, Windle and the rest of Ankh-Morpork’s undead and underemployed set off to find DEATH and save the world for the living (and everybody else, of course).

“Was that what it was really like to be alive? The feeling of darkness dragging you forward? How could they live with it? And yet they did, and even seemed to find enjoyment in it, when surely the only sensible course would be to despair. Amazing. To feel you were a tiny living thing, sandwiched between two cliffs of darkness. How could they stand to be alive?”

This is the second book in the series to feature DEATH, and another good one.  I don’t feel the need to do a full review.  If you feel the need to read one, then head over to Goodreads and read one of the 2,000+ you will find there.  I’m just going to list a few of my favorite things, do some quotes and then talk about covers.

“Belief is one of the most powerful organic forces in the multiverse. It may not be able to move mountains, exactly. But it can create someone who can.

People get exactly the wrong idea about belief. They think it works back to front. They think the sequence is, first object, then belief. In fact, it works the other way.”

When books have been around for a while, you often get multiple covers for them.  Some are good, some horrible and then some just mediocre.  Then of course there are the foreign which can be interesting.  Let’s start with the US and UK covers.

I think the first one here is the original cover and the second is the original paperback, both from the early 90’s.  The other two are from more recent editions.  I really like that original cover as DEATH does put on a pair of overalls in the book, but I don’t recall him ever leaning against a tree with a picnic.  But it still sets the tone of the book.  The paperback from the 90’s doesn’t really do it for me, but I like that they included a few more of the characters from the book.  The one with the snow globe was my favorite, snow globes amazingly do have an important role in the story, until I saw the last one.  I really like the simplicity of it, and the scythe being a stalk of wheat makes for an interesting motif.

And now for some foreign covers.  Most of these seemed to just be replicas of the original cover but these three stood out as quite different. 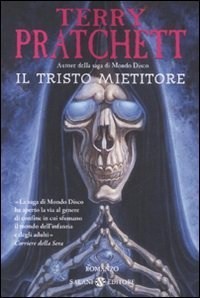 I love that first one which is Italian.  DEATH’s face is so expressive for a skull. I’m not overly fond of the other two.  The center one is German and the illustrator obviously never read the books, because DEATH’s robes are always described as black.  The French one is ok, but a bit hokey.

So now it is your turn. Which is your favorite cover?

Which is your favorite cover? (polls)

Thanks for voting.  I’m going to leave you with one final quote.

“No one is finally dead until the ripples they cause in the world die away, until the clock he wound up winds down, until the wine she made has finished its ferment, until the crop they planted is harvested. The span of someone’s life is only the core of their actual existence.”